Posted by AndrewF on August 31, 2014
Posted in: Exploring, Life Hike. Leave a Comment

God continues to prove to me that He loves me. And more than that, He knows my name. And more than that, He truly cares about me. Robin had talked to the radiologist last week and of course, the information was realistic. I  guess I was half hoping – No, WHOLE hoping that she would be giving Robin amazing news that the cancer has been eradicated and she wouldn’t even need radiation. Truly, the Lord will provide yet another miracle and give her a clean slate! So the realistic news she received was less than uhmm, joyful.

I had planned on a short camping trip to retreat and regroup. I wanted to visit the top of Bison Peak. It is a 12,439 ft. mountain in Park county,  about 18 miles north on county road 77, before you get to the Taryall reservoir. It is known for it’s unique rock formations at the summit, and it’s secludedness. I guess with all the 14’ers in the state, 12,000 ft doesn’t rate. It was perfect for me on both counts. Taz and  I set out to find rocks, views, and peace. 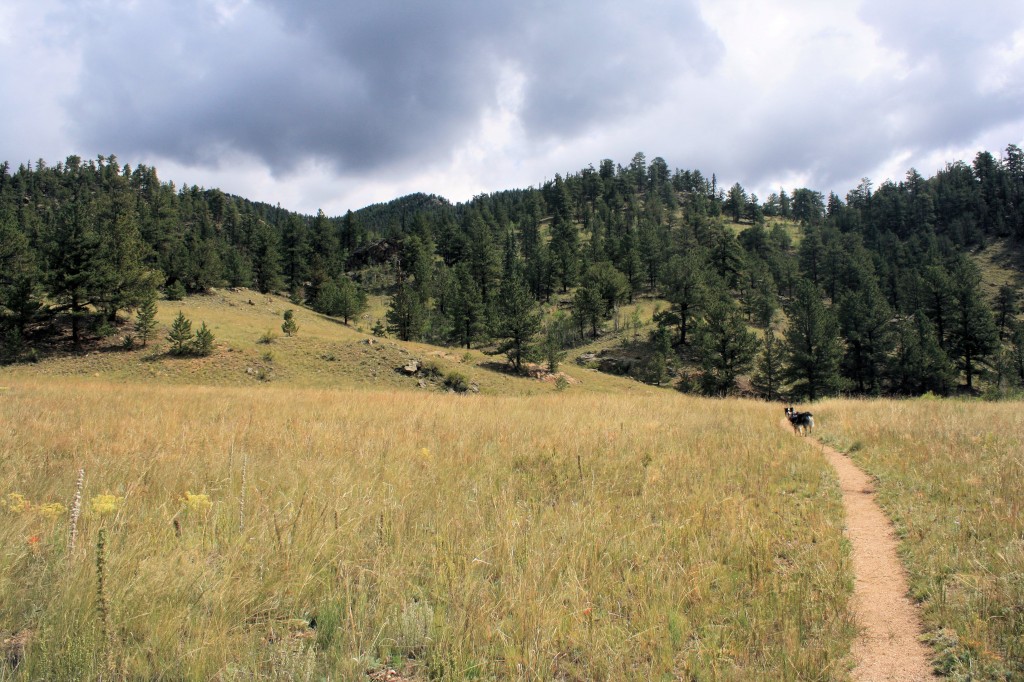 The Ute Creek trail starts out crossing the Taryall river by foot bridge, then across a meadow and gently slopes up from 8,500 ft. It runs through Aspen groves and Ponderosa Pine, following the Ute creek up to its source, Bison Peak. The trail sign said 4 miles to the McCurdy Brookside trail (a trail that runs north/south across both Bison Mtn and McCurdy Mtn) and 9 miles to Lost Park. The first mile and a half was a very gentle climb. Taz and I barely noticed we were going up at all, except for the creek running the opposite way, down hill. The trail started separating from the creek and soon we found the creek about 200 feet below us and the trail decided to get serious and then the rain set in. 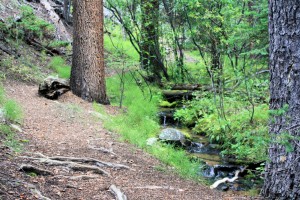 We found two huge boulders leaning against one another and decided to wait out the rain. It was a good opportunity for me to take a break as well. After going up for ever, I finally got a peek through the trees and the view spoke volumes of our altitude. We were finally getting closer to 12,000 ft. 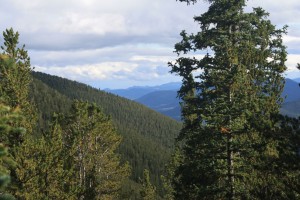 Taz was very good about scouting ahead, then coming back to check on me as I was stopping after every switchback to catch some air. Man, I really have to lighten my pack! We finally reached the McCurdy Trail and decided to camp there for the night. We would have enough  time to follow the trail north into the Lost Park to find water. 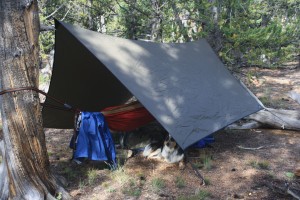 I set up my hammock and tarp, then Taz and I set off for water. We only had to hike about 1/2 mile to find the headwaters of Indian creek. We filled up our water bottles and headed home. That night, the temperature dropped to 27 degrees and  left a heavy frost on everything. About 0230 hrs, Taz had enough of the cold and decided to jump in my hammock with me.

We got up the next morning and I got the fire going again, fixed Taz’s breakfast and mine, then we started up the McCurdy trail to summit Bison peak. The trail went up through the bristle cone pines and after two long switch backs, breaks in the trees started opening up to reveal the world around. 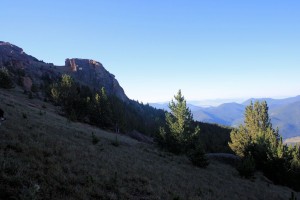 The closer we got to tree line, the greater the views got. I could see as far south west as Badger Mtn,  Southeast all the way to Pike’s Peak, The Collegiates were looming to the west, and the Platte and Kenosha mountain ranges to the north. Taz was patient in waiting on me to catch up on several occasions. 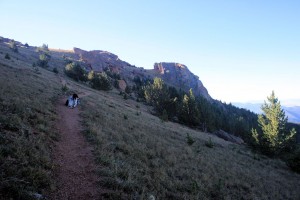 The top was so close! Even with the reduced weight of my  day pack (I only took my camera, water bottles, and water filtration system), it was still a chore to climb the mountain. At 11,000 feet and above, you really feel the effects of reduced oxygen. At the top, you could see the  trail marked with cairns, leading you off the summit and south, towards McCurdy mountain. 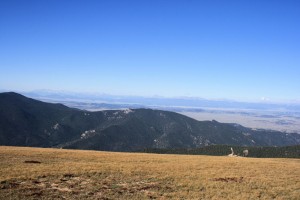 Taz and I just stood on the saddle and took in the beauty of the  unique rock formations all over the top. I looked across and saw a herd of mule deer  crossing the summit. They moved so fast, and so smoothly. They covered so much ground in so little time.  I  got really jealous, thinking how I had to slog my way up  the mountain yesterday. 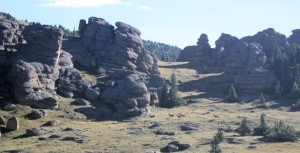 All the while, I  was  talking to the Lord about Robin’s situation. I  KNOW God has been with us every step of her journey. I KNOW God is faithful and everything works together for His glory, but sometimes it just wears on you and like children, we need reminders that we are loved, and we are cared for, and things will be okay. When I saw the deer, God spoke to me “Andrew, how can you look upon all this and still doubt Me? My plan is STILL the best plan and I am in control of all this. I will NOT forsake you, nor leave you.” I fell to my knees and wept and thanked God for loving us so much!

I stayed on the summit for another 2.5 hours, just drinking in the views and God’s amazing handy work. 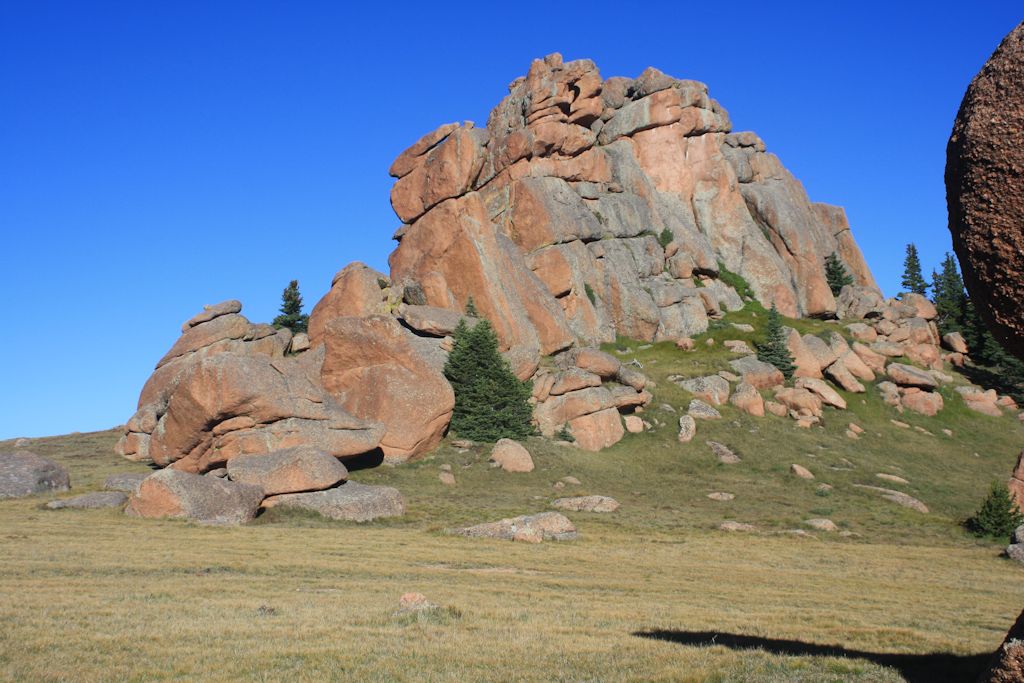 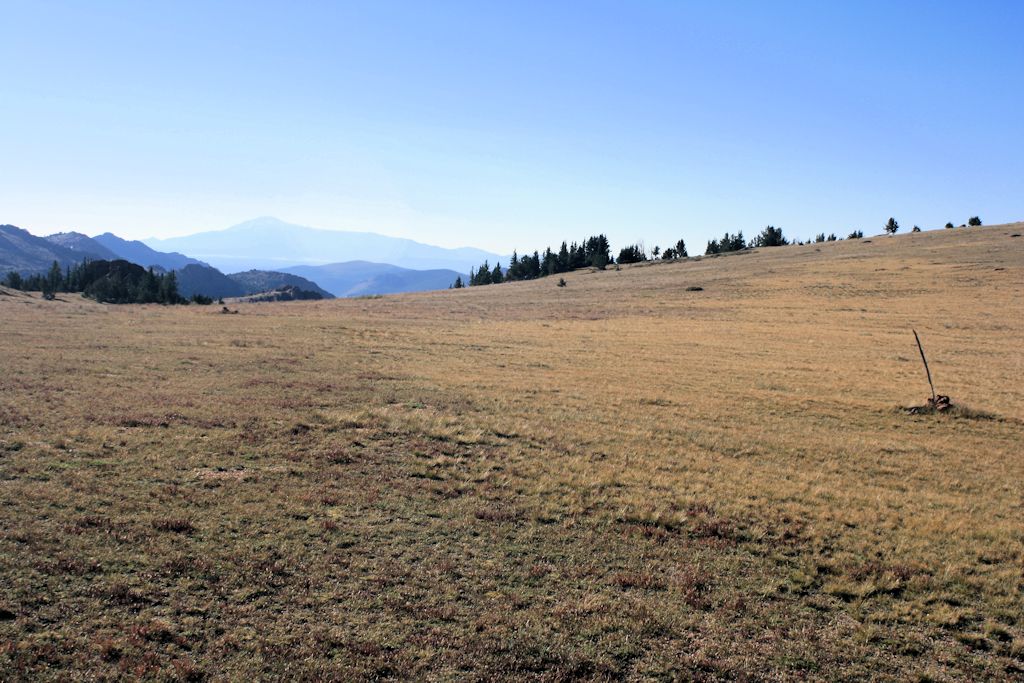 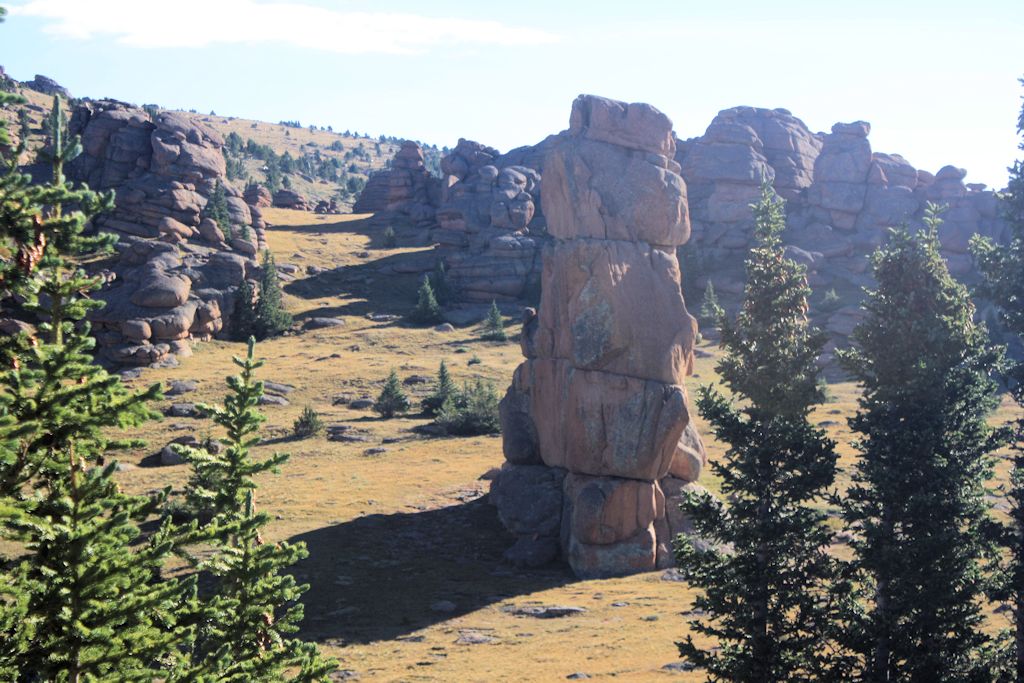 I found rocks, tons of views, and most importantly,  peace.

How is suffering a “good” thing?

Posted by AndrewF on August 10, 2014
Posted in: Life Hike. Leave a Comment

Trying to wrap my head around Chapter 4 in 1 Peter, It’s summed up in the last verse:

19 ” Therefore, those also who suffer according to the will of God shall entrust their souls to a faithful Creator in doing what is right.”

It makes sense! No healthy person wants to suffer, and to hear someone say they are willing to suffer for Christ, or are going through things and giving God glory and thanking Him for it is just weird – until you truly get it. I’ve tweaked my own personal definition of discipleship down to this: “Abandoning one’s self, for the sake of another.” If you are willing to abandon your Self (your desires, your comfort, your safe areas) for Christ, you will put yourself in harm’s way without hesitation, all for the sake of Christ. Not because its the cavalier thing to do, but because you hold to the blind knowledge (Faith) that Christ is going to bring you through ANYTHING and EVERYTHING for His glory and edification. The question is, Are you willing to abandon your self?

In John 21:15 – 17, Jesus asks Peter three times, “Do you love me?” and twice Peter answered “You know I love you” and the third time he answered “You know ALL things…” Peter’s word for love (Phileo) was not the same as Jesus’ word for love (Agape). I truly believe that Jesus was asking Peter, “Are you willing to abandon your self for me?” and Peter answered twice, “Lord, you know I like you, but…”.  To be a true disciple of Christ is to abandon your self- love Him with wreckless abandon. When you love like this, you WILL put yourself in harm’s way. You WILL suffer for Christ, but with the intimate knowledge that no matter what happens, your soul is safe, and kept by the Father’s love. Does that mean you’re weird? No. It means that you trust in God’s infinite wisdom and unfailing love!